Clarinetist Emil Jonason has been performing two concerts with Die Düsseldorfer Symphoniker the last few days, and will perform the last one tonight! The critics love him and the clarinet concerto ”The Erratic Dreams of Mr Grönstedt”, composed by Christian Lindberg.

Here are some of the reviews!

The concerto is a big hit, because the soloist, his [Lindberg’s] countryman Emil Jonason, not only shows virtuosic tricks with his clarinet, he purrs and hisses excitedly and thus provokes the range of his instrument, but also proves himself as a performer with entertainment. ”The erratic dreams of Mr. Grönstedt,” the subtitle says. The fictive figure of Grönstedt seems to have been experiencing high-spirited dreams. Since Grönstedt is a Swedish Cognac brand, it is about a delusion, which is experienced in many music styles. Lindberg mixes contemporary sounds with elements from nature and landscape romance, from entertainment, folk and film music. Suddenly Jonason interrupts the flow of music and says, ”My name is Grönstedt.” Sure, that provokes laughter. Should be so; Because Lindberg’s skilfully refined, sometimes cheeky style mix proves that new music does not have to be exhausting. He combines entertainment with a musical ambition – in the end, both the interpreter and the conducting composer are stormily celebrated.

This giant [Jonason] is a strikingly virtuosic musician, who can play on his instrument in an obscurely fast, high, loud, quiet voice, he can whisper and sing enchantingly. How many sound colors a clarinet can produce! 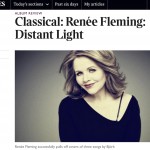